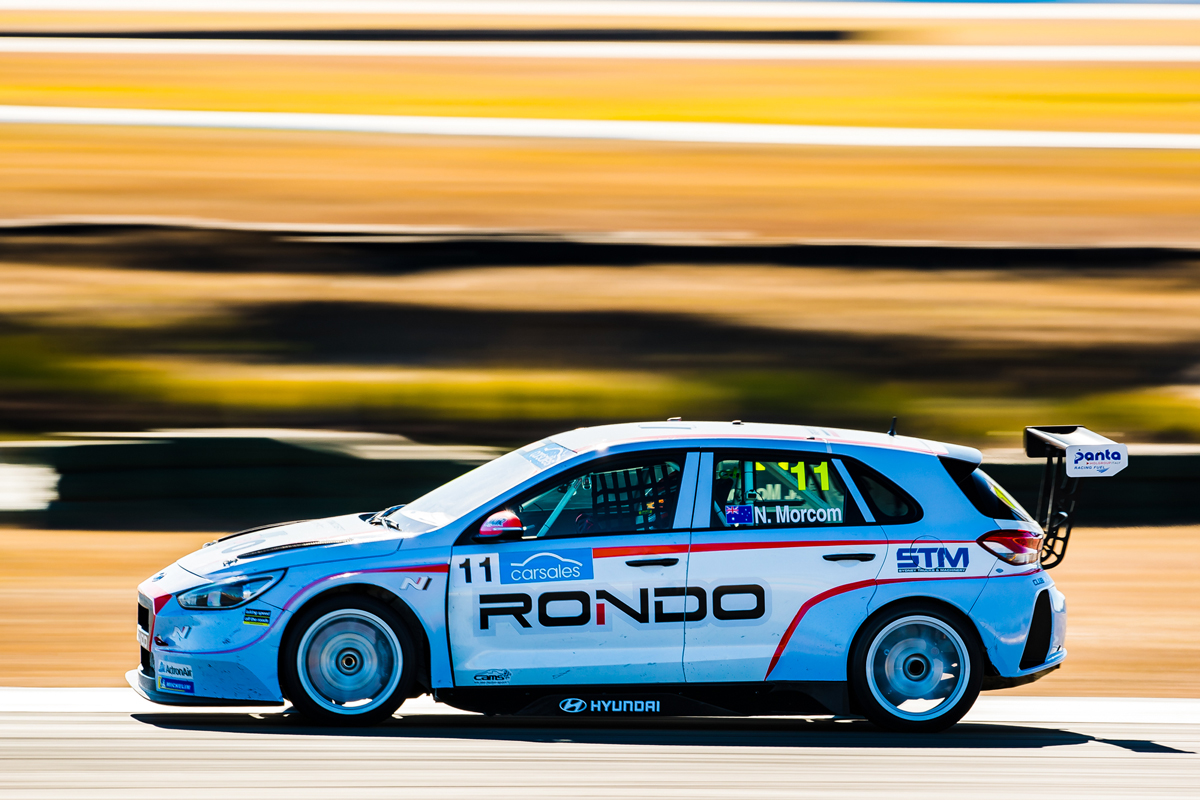 HMO Customer Racing has gone through their first-round without a podium finish in the inaugural TCR Australia Series at Queensland Raceway.

It was the strongest practice session shown by HMO Customer Racing throughout the series with Queensland-born Brown seeming right at home around the Ipswich circuit as he took P2 and P4 finishes in practice.

Morcom struggled with his brakes throughout Practice 1 finishing in P9, but improved after changes were made to the #11 car to finish in P7 for Practice 2.

Brown set the pace early in qualifying, moving to P2 in his opening lap, later moving down the timesheet through the mid-part of the session until moving to the top with 5 minutes left.

Brown’s top time was beaten in the dying minutes and he finished in P3, with the top five times covered by a tenth of a second.

Morcom opted not to use his supply of green tyres for qualifying, instead choosing used tyres for the 30-minute session.

It proved costly as the #11 car qualified outside the top 10.

In the opening race of the weekend, Brown lost a place into turn 1 from a P3 start, which was the beginning of a rough day for the 21-year-old.

Brown then ran wide at turn 6 after contact with Martin on the same lap and claimed a punctured tyre as a result of the clash.

Brown made a short cut through the circuit on lap 2 to get into the lane for a replacement tyre and the HMO Customer Racing pit crew scrambled to get the series leader back onto the track.

Brown received a black flag for his short-cut, ruling out any chance of making a comeback and finished in P16.

On the other side of the shed, Morcom moved quickly off the grid, slicing his way to P9 through lap 1 but the field spread quickly along the dry tarmac as passing became harder the longer the race went on.

Morcom managed to move into P7 but was unable to catch the leading cars as they pulled away for the rest of the 21-lap race.

Morcom held his spot off the line from P6 and had his sights set on Cox in P5, applying pressure for the remainder of the race but unable to make a pass stick and settling for P6.

Brown looked determined early as he looked to recover from Saturday’s misery and raced to P10 from a P16 start by the end of lap 2.

Brown caught up to Moffat in P9 by lap 5 and applied plenty of pressure on the Renault driver but wasn’t able to find the opportunity to pass.

Brown brakes faded late as he struggled to find his way through, with a P10 finish the best he could manage.

Brown’s car underwent a brake change in the short turnaround between Race 2 and 3 as the team raced to get the #30 car to the grid in time without a penalty.

The team managed to make the change, but it was closer than expected, nearly costing Brown a pit-lane start.

As the lights went out for the final race of the weekend, Morcom diced down the inside of Cox to take P5 into turn 1 and then moved into P4 by the end of the opening lap.

As the race unfolded, Morcom continued to maximise his tyre life after saving his green tyres from qualifying earlier in the weekend.

D’Alberto looked vulnerable at stages ahead of Morcom but a pass wasn’t able to be made, with the #11 car finishing one spot away from a spot on the podium.

Like Morcom, Brown wasn’t able to get past another car after the field spread and crossed the line in P8.

John Martin suffered a 5-second penalty from an incident during the race meaning Brown would finish in P7.

"Pretty tough weekend really, the incident in Race 1 hurt me. Based on the layout of the track, once you’re at the back of field, it’s very difficult to get back to the front. We struggled with straight-line speed and braking as well over the round which made it hard to move through the pack. I’ve still got the series lead so I’ll move quickly on from QR and hope for a better run in Winton."

WILL BROWN
HMO CUSTOMER RACING DRIVER
"I had a consistent run in all three races, managing to bank some important points for the series standings. Our decision to not run green tyres on qualifying hurt us little in the end, but there was plenty of positives to take out of the round. A big thanks to the HMO Customer Racing Team for their work on the #11 car between each race to get me in those finishing positions."

"Queensland Raceway was always going to be a little tough for us, with the straight-line speed required which is not generally accustomed to our cars. Nath had a reasonable weekend with some consistent results and seems to be improving as the year goes on with his car set-up. Will hurt himself there early in the weekend, but he’ll quickly bounce back. Our cars should suit the Winton circuit quite well so we’ll look forward to it at the end of the month."

BARRY MORCOM
HMO CUSTOMER RACING TEAM OWNER
The HMO Customer Racing Team will now prepare for Round 5 of the TCR Australia Series, to be held on 30 August – 1 September at Winton Motor Raceway with all races to be televised LIVE and FREE on SBS HD.