HMO Customer Racing has debuted at the TCR Australia Series in a big way after Will Brown won two out of three Races in the opening round at Sydney Motorsport Park.

Brown starred in the Hyundai i30 N TCR Car, climbing the podium three times to clinch the Series lead after Round 1, with his teammate Nathan Morcom improving as the weekend progressed.

Qualifying for Race 1 was competitive for Morcom and Brown, both running in the top 3 in the early stages of the 30-minute session.

As qualifying moved into the last 5 minutes, a yellow flag halted hot laps for both Morcom and Brown, meaning the pair would have to settle for their earlier lap times after the track failed to offer after the yellow flag. Brown would start in P4 and Morcom in P7 for Race 1.

In Race 1, Brown moved on the outside of O’Keefe into the first corner of Lap 1, quickly turning his attention to D’Alberto in P2.

For the majority of the Race, Brown stuck closely to D’Alberto’s tail however he was unable to get past the Honda Driver.

Morcom showed his poise just as well in the opening Race, moving up into P5 by Lap 8.

Morcom looked strong as he pushed through the pack until his tyres started to wear towards the latter part of the Race. Morcom lost spots as a result and moved back to finish P8.

An incident from earlier in Race meant Morcom would move to P9 after a 5-second penalty.

The starting line-up for Race 2 was a progressive grid, meaning Brown would start from P3 and Morcom from P9.

Brown was quick to engage again, securing P2 on the opening lap as Morcom got caught up in a mid-pack scrabble losing a place into Turn 1.

Brown’s car pace proved to be a real threat on track, passing D’Alberto on Lap 3 to move into P2.

The fast-starting O’Keefe was next on Brown’s list, as he pressed the #30 Hyundai i30 N TCR Car forward, eventually to move into the lead down at Turn 7 on Lap 14.

Morcom fought back through the Race from P10, contesting hard with Almond and Cameron to reach P7, before losing a spot on the last lap. 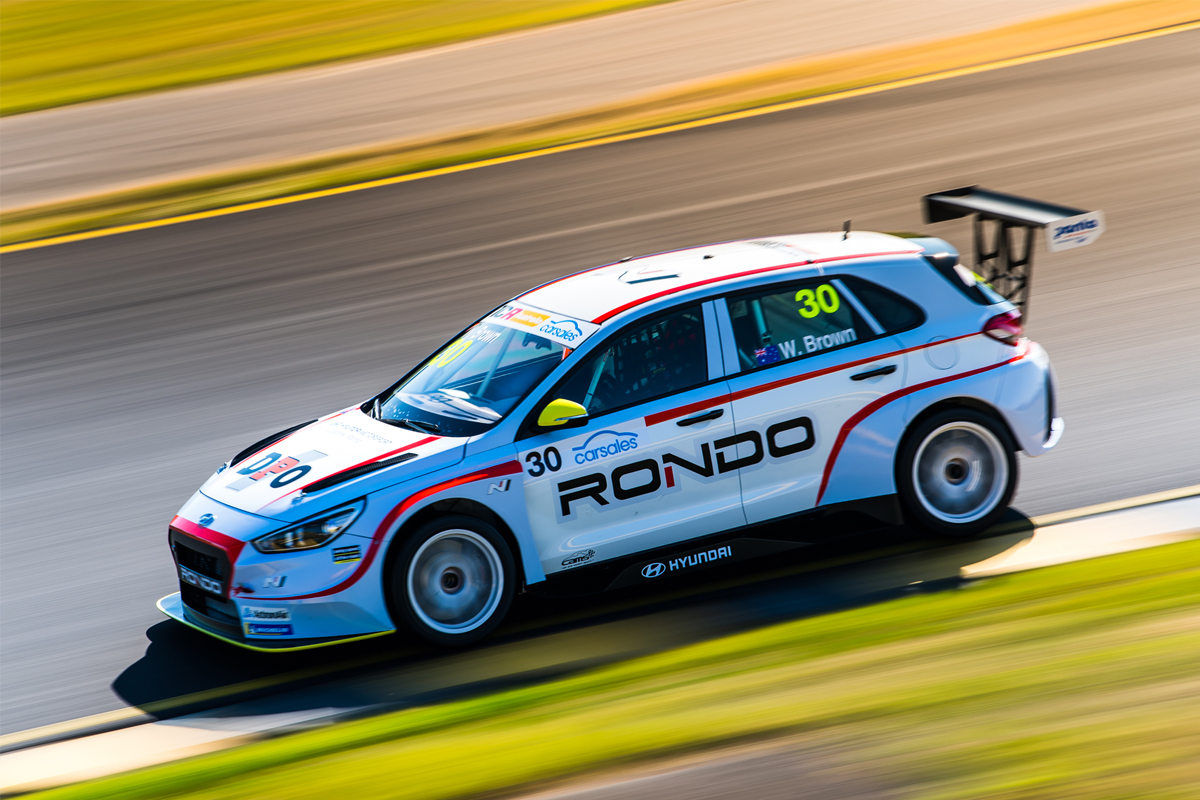 After his impressive win in Race 2, Brown was slow off the start line from P1, moving back two places throughout the opening turns. Meanwhile, Morcom passed Almond on his way to P7 in the first lap.

In what was a frantic start to Race 3, the safety car was out early after Breukers and Vernon crashed in separate incidents during the opening lap.

The race was restarted on Lap 5, with both Hyundai i30 N TCR Cars eager to move towards the front.

After Heimgartner in P1 wavered with mechanical issues, Brown picked off O’Keefe for the second time in the day to move into the lead with 8 laps remaining.

Morcom cracked the whip as he moved the #11 Car into P4, setting the quickest lap of the Race in a bid to climb into P3.

Brown extended his margin as he surged towards the chequered flag, crossing the line to claim back-to-back wins on Sunday.

Morcom crossed the line in P4 but was issued with three penalties totaling sixty seconds demoting him to P11.

"It was a great first round at SMP. We had some intense and exciting battles over the weekend of racing. To take two wins out of the three races is incredible, I can't thank the team enough for all their hard work."

WILL BROWN
HMO CUSTOMER RACING DRIVER
We showed good signs over the weekend besides the mixed results. I've defintely got the Car to challenge up the front, it just needs to be tightened up in a few areas before we take on Phillip Island for Round 2.

NATHAN MORCOM
HMO CUSTOMER RACING DRIVER
"It’s been a great weekend for HMO Customer Racing in the first outing of the TCR Australia Series. We’ve had some very strong results, which will provide a solid foundation for our team to build on. To win two out of the three Races is a huge effort by the HMO Team, especially Will for his efforts on track. There’s still some work to be done; we struggled with tyre degradation throughout the weekend as most teams did. It will be interesting to see what we learn after this Round that we can take onto Phillip Island."
BARRY MORCOM
HMO CUSTOMER RACING TEAM OWNER

The HMO Customer Racing Team will now prepare for Round 2 of the TCR Australia Series, to be held on 6 – 9 June at Phillip Island with all races to be televised LIVE and FREE on SBS HD.